Diksesh Patel didn’t exactly have a dream childhood: He grew up in a rough neighborhood in London, where he often found himself on the wrong side of beatings, muggings, and bullying. Over time, he gradually turned to food—and overeating—as a coping mechanism.

Initially, Patel, now 50, ate to build himself up, thinking that the more he consumed, the bigger he’d get. This pattern continued well into adulthood until his weight eclipsed 260 pounds, and his doctors began to warn him of the onset of diabetes. Worse, he had a family history of early heart attacks, and understood he was tempting fate.

“I knew if I didn’t sort this,” he says, “I wouldn’t be able to watch my two sons grow up.” It wasn’t until a vacation in Thailand in 2018, however, that Patel realized just how dire his situation had become. “I’d been indulging in a few too many beers and tasty foods,” he says. “When I came back, my borderline diabetes was in danger of becoming the real thing, my blood pressure was out of control. My gout had flared up, and it felt like a glass shard was being pushed into my foot and knee. I remember just crying as I looked at myself in the mirror. That was my lightbulb moment.”

To get himself back on the right path, Patel started by simply walking more, ensuring that he hit 10,000 steps a day. He paired that eating less—just a little bit, at first. While these small changes had a modest impact, Patel couldn’t fathom how he’d lose all of the extra weight. So, he enlisted the help of some professionals—specifically, the trainers at RNT Fitness, a UK-based gym chain that specializes in dramatic weight loss transformations.

“I’d seen some friends get great results with them, and I needed the mentorship and support to help me along,” he says. “They created personalized nutrition and training plans that worked around my busy day.” With a plan in place, Patel started working out three days a week using a series of full-body workout plans. He then progressed to a variation of an upper / lower split as Patel got stronger.

Patel says the first six weeks were a breeze—he rapidly lost weight and saw a massive transformation in his body. “It was great for momentum, and it felt like my body was in complete overdrive,” he says. “It felt like exactly what I needed, but I knew this was going to be a long road ahead.”

Still, there were roadblocks along the way, Patel admits—for starters, not everyone in his life was as supportive of his weight loss goals as he’d hoped. Rather than dwell on the haters, however, he stayed focused and committed. “It was this ‘me time’ that allowed me to push forward,” he says, “I also created so much accountability with my coach and in the community at my gym.” After a few more months of working out with his trainer and eating more mindfully, Patel officially hit his new goal weight of 156 pounds. 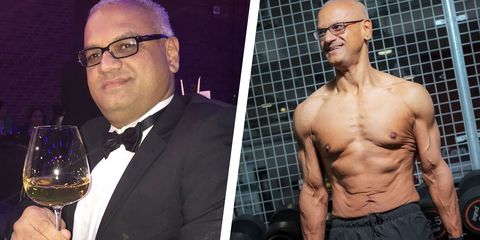 Beyond losing weight, Patel also saw a wide range of improvements to his health: He’s no longer pre-diabetic, no longer suffers from gout, and feels more energetic than ever. “If you’re reading this, remember that we all have it within us to create something special of ourselves,” Patel says. “Find your ‘why’, connect with it, and use it as fuel to transform. Look deeper than aesthetics—it’s always more than the physical.”

Subway: With these coupons and discounts will save you in June

J. Lo Just Posted a Photo of Her Incredible Abs After Cutting Carbs for 4 Days