Drinking more than two cups of coffee per day may double the risk of heart disease mortality in patients with extremely high blood pressure, a study suggests.

Japanese researchers from Tokyo’s National Center for Global Health and Medicine found that people with a blood pressure of more than 180/100mmHg were twice as likely to die of heart disease if they drank two cups of coffee each day.

Interestingly, this same risk did not apply to people who had what US officials describe as Stage 2 hypertension – blood pressure of 140/90mmHG or higher – as their risk of heart failure did not increase with coffee consumption.

Whether or not coffee is good for health has long been debated by scientists. Previous studies have found that multiple cups of coffee each day could reduce all-cause mortality, while others have linked the brew to cancer. 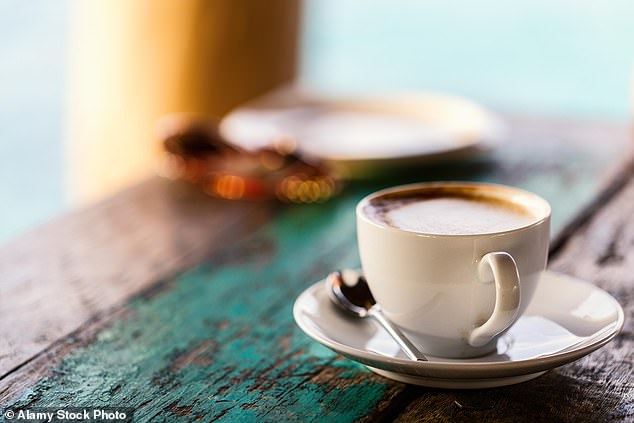 Caffeine, the most notable ingredient in coffee, is known to increase a person’s blood pressure and heart rate for a temporary period of time.

It is still unclear whether consistent coffee drinking can cause long-term increases in blood pressure, cholesterol or other harmful effects to the heart.

There are also outside factors at play with coffee drinking that can cloud these types of studies, like how much sugar or milk a person puts in their drink.

The research team cites previous studies, where a person who had survived a heart attack could prevent future complications with a cup each day. 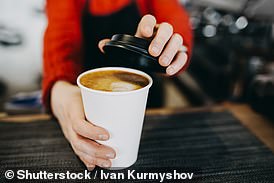 They also note previous research linking the morning brew to a reduced risk of chronic illnesses like type 2 diabetes and cancers.

‘Our study aimed to determine whether the known protective effect of coffee also applies to individuals with different degrees of hypertension; and also examined the effects of green tea in the same population,’  Dr Hiroyasu Iso, a researcher from the center, said in a statement.

‘To the best of our knowledge, this is the first study to find an association between drinking two or more cups of coffee daily and cardiovascular disease mortality among people with severe hypertension.’

Researchers, who published their findings Wednesday in the Journal of the American Heart Association, gauged how drinking coffee and green tea each day could impact heart health.

Data was gathered from the Japan Collaborative Cohort Study for Evaluation of Cancer Risk, an annual study which determines risk of cancer based on certain life-style choices.

As part of the annual survey, participants would report their dietary habits, like how much coffee they drank each day.

They would also report health conditions they had been diagnosed with, including hypertension.

People who drink between 1.5 and 3.5 cups of coffee per day are less likely to die

Drinking between one-and-a-half and three-and-a-half cups of coffee a day could add years to your life, a major study finds.

A Chinese research team monitored 171,000 people for seven years and found those who regularly drank coffee were about a third less likely to die than those who did not.

It didn’t matter whether the coffee was plain or sweetened with sugar, they added.

Several studies have pointed to the potential health benefits of coffee from reducing the risk of type 2 diabetes to making someone less likely to be depressed.

Scientists suggest this could be because the beans contain antioxidants, helping reduce internal inflammation and cell damage.

Researchers split the sample population into five groups. The first were the optimal group, who had a healthy blood pressure of 130/85mmHg.

Second was a group with higher, but still healthy, blood pressure at 130/85mmHG.

Anyone with a blood pressure higher than 140/90mmHG was considered to have hypertension.

Any participant with a blood pressure more than 180/110mmHG was placed into category 2.

Coffee consumption had no link to heart disease mortality in each group other than category 3. Green tea had no link to cardiovascular death in any of the groups.

For the group with the highest blood pressure, researchers found that drinking two cups of coffee each day raised risk of heart disease death over the study period two-fold.

Interestingly, there was no notable increased risk for people who drank only one cup.

‘These findings may support the assertion that people with severe high blood pressure should avoid drinking excessive coffee,’ Dr Iso went on to say.

‘Because people with severe hypertension are more susceptible to the effects of caffeine, caffeine’s harmful effects may outweigh its protective effects and may increase the risk of death.’

The Centers for Disease Control and Prevention (CDC) reports that 45 percent of US adults have uncontrolled hypertension – at least 140/90mmhg or higher – which would put then in at least category 1 in this study.

There is no data on how many Americans have blood pressure higher than 180/110mmHg.

High blood pressure can damage arteries and blood vessels throughout the body. Over time, this can lead to less oxygen-rich blood making its way to the heart.

This can lead to severe complications like heart disease, stroke, a heart attack or heart failure.