DR MICHAEL MOSLEY: Sorry vegans, I won’t give up my juicy steak any time soon

As you walk round your supermarket, do you pause by the burgers, pick them up, put them back and go in search of something healthier? In a restaurant do you order a vegetarian dish though you would secretly prefer steak?

It seems that eating meat, once an innocent pleasure, has become a guilty one.

First came the annual Veganuary campaign, which saw 100,000 Britons ditch animal products as a New Year health-kick. Then last week, leading scientists urged us all to slash meat consumption in order to save the planet from the current health and environmental crises.

NHS guidelines suggest limiting red and processed meat to 90g (uncooked) or 70g (cooked) weight a day, which is roughly two rashers of bacon, one-and-a-half sausages, or half an 8oz steak. 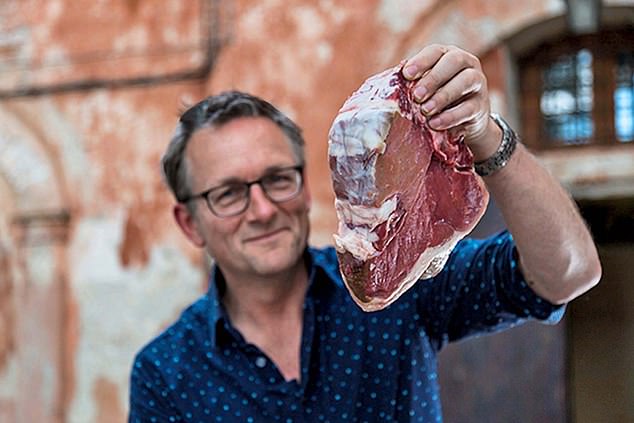 The health benefits of red meat are rarely reported. But make no mistake, there are plenty, writes Dr Michael Mosley (pictured)

But writing in The Lancet, the authors of the new ‘planetary health diet’ encouraged people to eat red meat no more than once a week, and no more than (roughly) 90g a week. So forget that extra half a sausage, while eggs should be limited to about one a week, and you’d be allowed about one chicken breast a week too.

And, while I’m not a crazed carnivore, I think claims such as these do need a bit of investigating…

The health benefits of red meat are rarely reported. But make no mistake, there are plenty.

Not only is meat a good source of protein that is easily absorbed by the body, but it is abundant in important micronutrients too.

Vitamin B12, found exclusively in animal products, is important for brain development. Studies show deficiencies can lead to fatigue, memory loss and, in severe cases, permanent brain damage. Unless vegans take a daily B12 supplement, they will almost certainly be deficient. Oxford University researchers recently compared blood levels of meat-eating and vegan men. Half of the vegans were Vitamin B12 deficient, compared to just one meat-eater. 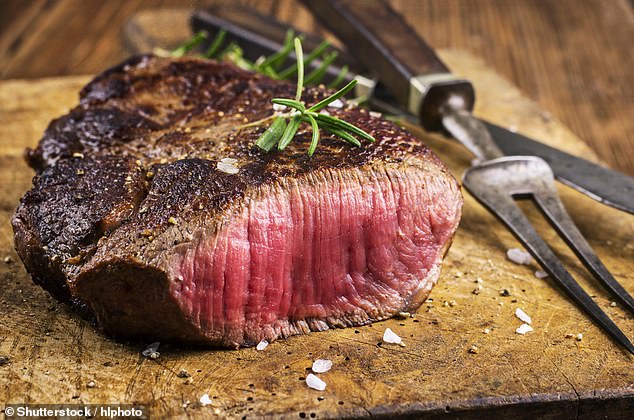 Not only is meat (pictured) a good source of protein that is easily absorbed by the body, but it is abundant in important micronutrients too

There’s also the issue of zinc, important for maintaining a healthy immune system. A recent analysis of scientific literature in The American Journal Of Clinical Nutrition noted that vegetarians and vegans are at a significant risk of zinc deficiency.

Although grains, seeds and legumes contain the mineral, they also have a compound called phytates, which stops the body absorbing zinc.

There’s plenty of easily absorbable zinc in meat, eggs and shellfish, which means those who avoid these foods are missing out.

While we should limit artery-clogging saturated fat – found in pork chops, lamb kebabs and steak – to 30g daily, we ought not to banish fat altogether.

The unsaturated fatty acids in oily fish, eggs, lean meat and chicken are shown in studies to protect against dementia and heart disease, and lower cholesterol levels. However, it is possible to get an adequate supply of this fat with a regular handful of nuts.

Why I don’t trust all these studies

ARE vegetarians really healthier than those of us who eat everything? Some well respected studies seem to have suggested so.

A 2009 review by the American Dietetic Association noted lower incidence of heart disease, diabetes and high cholesterol, as well as premature death, in vegetarians. I investigated this theory a few years ago during a trip to Loma Linda in California, where I interviewed Dr Gary Fraser who studies Seventh-day Adventists. Although most Adventists avoid meat, some do not, which gave Dr Fraser the chance to compare the health of two very similar groups who differ only in their meat-eating habits.

I am keen to achieve at least 12-hour intermittent fasting each evening, in order to gain all the health benefits you have outlined previously. However, would having drinks such as water flavoured with a squeeze of lemon juice, or else water infused with raspberries (but not actually eating the berries), cause the fast to be broken?

Keeping well hydrated is a vital part of doing an 800-calories per day diet, as it prevents you from feeling exhausted and feeble. If adding a handful of berries or perhaps slices of cucumber encourages you to drink plenty of water then go for it.

Fruits such as berries are low sugar, so even if you do eat a handful of them, the added calories are likely to be insignificant.

Over lunch (he ate salad and bread, I ate pork and spinach) Dr Fraser explained his findings, namely that men who ate red meat – specifically beef – three times a week or more had double the risk of fatal heart disease of vegetarians. Worryingly, this risk was even found for those eating below the 70g-a-day Government recommendation.

Staring at my plate, Dr Fraser remarked: ‘If you compare what I’m eating with what you’re eating, our evidence suggests that this will lead to a difference of four to five years of life expectancy.’

But there’s a significant problem with research like Dr Fraser’s: it may not be measuring the effect of diet alone on health, but a host of other factors too.

For instance, although vegetarians and meat-eaters in Dr Fraser’s studies are well-matched on characteristics, the meat-eaters are still generally less healthy. They drink more, smoke more and do less exercise. Dr Fraser admits that there are a host of other variables which may also affect someone’s health beyond his control, such as stress, family history and socio-economic factors.

To add to the confusion, the findings of the 2009 European Prospective Investigation into Cancer and Nutrition (EPIC) study seems to suggest differently.

Researchers followed half a million people in ten countries for over 12 years.

They found that eating moderate amounts of red meat had no effect on mortality, and that it was a beneficial source of nutrients.

Roast-chicken fans are in luck too; the general scientific consensus is that poultry poses no risk and is recommended as part of a balanced diet.

Before meat-eaters rejoice over a fillet steak, be aware of a significant sting in this study’s tail.

The EPIC study, like almost every other study, found that eating processed meat (such as bacon and sausages) did have a negative effect on health.

Consume more than 50g (two rashers of bacon) a day and the risk of death from heart disease and cancer begins to climb slightly. 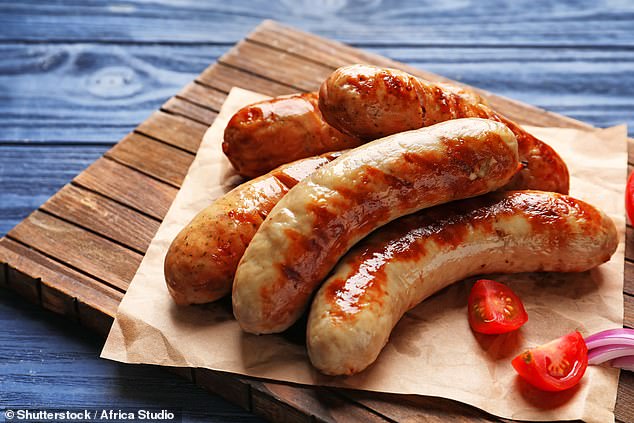 The EPIC study, like almost every other study, found that eating processed meat (such as bacon and sausages – pictured) did have a negative effect on health

It’s estimated that eating 50g of processed meat a day, over the course of a lifetime, increases your risk of developing cancer of the colon or bowel by about 1.18 per cent.

Do you have a question for Dr Mosley?

Email [email protected] or write to him at The Mail on Sunday, 2 Derry Street, London W8 5TT.

Dr Mosley can only answer in a general context and cannot give personal replies.

To put it in context, one in every 100 cases of colorectal cancer may be processed red meat-related. By comparison, one in eight cancers – that’s all cancers – are thought to be caused by smoking.

After assessing all the evidence, I’ve cut back on processed stuff and buy less bacon and sausages than I used to.

I consider myself ‘flexitarian’, and commit to at least two meat-free days a week.

But I still love the occasional steak, and can’t promise I’ll give that up any time soon.