DR MICHAEL MOSLEY: Don’t all shout but I refuse to wear a cycle helmet and here are my reasons why… 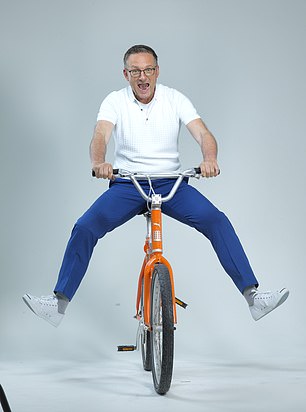 I have a confession to make: I rarely wear a cycling helmet, finding it an uncomfortable inconvenience. My wife thinks this is wildly irresponsible and has been known to let the air out of my tyres to get me to change my ways (Dr Michael Mosley is pictured)

When I am out and about in London, travelling between work meetings, you’ll most likely spot me aboard my beloved, lurid pink bicycle. Given my aversion to running, cycling is absolutely my exercise of choice.

Not only is it a quick, easy and cheap way to get around the capital, but it’s a great way to squeeze in exercise without getting uncomfortably sweaty.

But most people I meet think cycling is reserved for young, sprightly twentysomethings with bags of youthful energy.

They couldn’t be more wrong. A recent study of more than 30 million cyclists worldwide revealed that it’s not millennials who make the speediest, most proficient cyclists but the over-50s.

According to the research by cycling app Strava, middle-aged cyclists travel at greater speeds and have greater endurance than their younger counterparts.

Cyclists over 50 also benefit more from the social aspect of cycling, with two-thirds regularly meeting friends to enjoy a ride.

And while it is well known that regular cycling, as with every exercise, can reduce blood pressure, cholesterol and depression, new research has confirmed that it makes us live longer too. 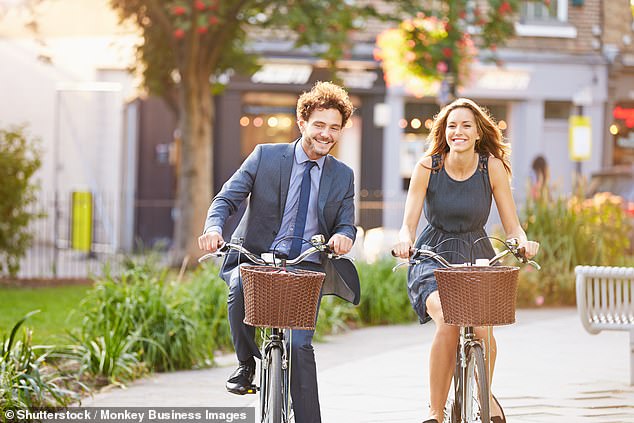 According to University of Bath scientists, drivers are more likely to veer dangerously close to helmet-wearers due to a subconscious belief that those who wear a helmet are more serious, experienced and predictable than those without, says Dr Michael Mosley

A study from Bispebjerg University Hospital in Copenhagen followed 8,000 men and women for 25 years, and found that those who cycled daily lived almost four years longer than those who did minimal exercise. Remarkably, life expectancy for cyclists was greater even than that of runners, with bike-lovers living, on average, an extra five months.

Cycling puts less pressure on the joints than running does and it increases mobility in the knee joints and hips, while the muscle built provides extra cushioning, reducing friction.

Despite the obvious health benefits, the average Briton gets on board a bicycle just 18 times each year, according to the Department for Transport.

The picture is bleak; 96 per cent of local authorities report that less than 20 per cent of their adult population cycled at least once each week.

Why do so few share my favourite hobby? One of the main deterrents is safety. A 2017 Government survey found road safety to be the main barrier for 62 per cent of Britons who have never cycled.

Even among those who do cycle for leisure, 42 per cent deem the roads are too dangerous for everyday journeys.

But these fears are largely unfounded. Despite a handful of horror stories, the number of cyclists who die every year is surprisingly very low. According to the Department for Transport, you are, mile for mile, more likely to die while walking than cycling, even in cities.

Latest figures show that about 100 British cyclists lose their lives on the roads, compared to 448 walking pedestrians and 319 motorcyclists.

POLLUTION? CYCLE THE BACK STREETS

Another common concern is the level of air pollution riders may be exposed to.

I’ve lost a stone and a half in six months on your 5:2 diet. I still have another half a stone to go. The thing is, I love Christmas and just want to forget the diet for two days. Will I ruin my hard work?

Should readers who have tried the 5:2 diet and found it works let themselves go over Christmas? The reality is that most people do. In fact, most Britons gain about a pound between Christmas and New Year. This is not likely to make a lasting impact to your weight-loss goal.

Most of it will fall off after the festive season as you return to your regular routine, which should involve less time spent sitting on the sofa and eating.

But be disciplined – pick a realistic day in the first week of January and make it the day you get back on track.

Both petrol and diesel cars emit tiny particles of nitrogen oxide that can irritate and inflame the lungs, increasing the risk of respiratory problems. Most UK cities are striving to improve air quality, offering incentives and financial rewards to those who travel without using a car.

You may think that being on a bike increases the exposure to nasty fumes, but you’d be wildly mistaken. Over the past ten years, I’ve conducted a number of experiments in which I used air pollution monitors to track the fumes that entered my lungs while cycling. I cycled, walked and took a taxi for a three-mile stretch of busy London road, testing pollution levels after each journey.

Surprisingly, far higher levels of inhaled pollution were detected in the back of a taxi compared to cycling and walking.

I also found that when I changed my route and cycled through the quieter back streets, the pollution levels dropped dramatically.

A recent study by researchers at King’s College London found that cyclists on busy roads were exposed to five times less black carbon (soot) than those in cars.

The scientists explained that fumes from the exhaust of other vehicles enters in front and behind and doesn’t disperse, whereas cyclists escape quickly. A study by Cambridge University concluded that even if air pollution levels in London were to increase ten times over, the health benefits of cycling over a lifetime would still outweigh the risks.

I have a confession to make: I rarely wear a cycling helmet, finding it an uncomfortable inconvenience. My wife thinks this is wildly irresponsible and has been known to let the air out of my tyres to get me to change my ways.

But there is also evidence that not wearing a helmet may protect you from crashes.

According to University of Bath scientists, drivers are more likely to veer dangerously close to helmet-wearers due to a subconscious belief that those who wear a helmet are more serious, experienced and predictable than those without. During a series of experiments, psychologist Ian Walker has shown his prediction to be true. 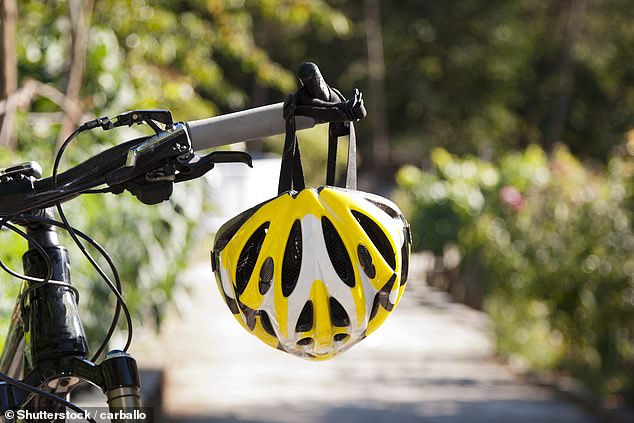 In Holland everyone cycles, yet no one wears a helmet (pictured). In Sydney, where helmets are compulsory, surprisingly few people use bikes as a way of getting around the city

Some studies even show that wearing a helmet can put people off cycling altogether.

In Holland everyone cycles, yet no one wears a helmet. In Sydney, where helmets are compulsory, surprisingly few people use bikes as a way of getting around the city.

Bike-share schemes that are popular in Europe have never taken off in Australia, largely because of the perceived inconvenience of wearing a helmet.

Of course I would never discourage anyone from wearing a helmet, but if you spot me cycling without one (as a shocked reader did recently), at least now you know why.

Weight loss drink: The 8 benefits of ‘one of the healthiest beverages on the planet’