The majority of doctors say they are too busy to provide the quality of end-of-life care they would like to.

That’s the finding of a new survey done by the Royal College of General Practitioners, which quizzed 1,000 GPs across the UK.

The research also found 62 per cent of doctors feel there’s insufficient community support available to terminally ill patients and their families, because of a lack of funds. 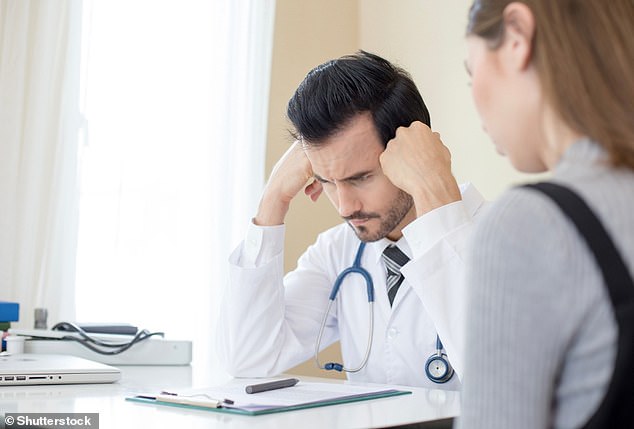 Insight: A new survey undertaken by ComRes for the Royal College of General Practitioners, analysed 1,000 GPs across the UK – with alarming results

Although 92 per cent of doctors said end-of-life care is an ‘important’ part of being a doctor, four out of five of them say they don’t have enough time to do it well.

The Royal College of GPs announced its findings as it launched a new set of standards with terminal illness charity Marie Curie, GP Online reported.

Its survey results come amid numerous warning signs of the strain being put on family doctors around the UK.

Official figures showed in February that 41 per cent of GPs – around 10,000 doctors – are 50 or over and are expected to quit within the next five to ten years.

And 2.5 million patients are at risk of their local GP surgery closing because so many are relying on doctors who are close to retirement, it was last week revealed.

At the same time, fewer young doctors are choosing to specialise as GPs and are opting for other career paths as surgeons or specialists.

Many GPs are retiring in their 50s, moving abroad or leaving to work in the private sector, increasing the pressure on those who still work in the sector.

Appointment waiting times are getting longer and more people are going to A&E for minor illnesses because they can’t see a doctor.

Despite an NHS a plan to recruit 5,000 extra GPs by 2021, numbers of family doctors are falling.

And 762 GP practices across the UK could close within the next five years, according to the Royal College of Nursing.

Rachel Power, chief executive of the Patients Association, last week told The Times: ‘This is a desperate situation with potentially serious consequences for patients.’

The Government recently announced its plans to recruit 5,000 GPs between 2015 and 2020 is destined to fail, and hundreds of practices are at risk of closing.

As the staff shortage fails to improve, doctors’ workloads are becoming bigger and patient lists longer.

Dr Catherine Millington-Sanders, end of life care lead at the RCGP and Marie Curie, said: ‘GPs are central to providing excellent end of life care, and we know how much patients and their families value being able to have an open conversation with their doctor about what lies ahead.

‘Our colleagues are already working hard to provide this level of care, but pressures on our system and a lack of resources in the community can sometimes make going the extra mile that bit harder, which can be incredibly frustrating for us and our teams.’

The two organisations have launched their ‘Daffodil Standards’, which advise surgeries and hospitals how they can improve their end-of-life care service.

Published on the RCGP website, it is described as ‘a blend of quality statements, evidence-based tools, reflective learning exercises and quality improvement steps.’

This includes: competent staff, early identification of patients/carers, assessment of unique needs, care after death and GP surgeries being compassionate.

RCGP chair Professor Helen Stokes-Lampard said: ‘We’re delighted to be able to launch these standards with Marie Curie and hope they go a long way in supporting GPs, their teams, and, of course, our patients, but current pressures on our service and the effects they are having on our ability to consistently provide high-quality palliative care cannot be ignored.

‘That’s why it’s essential that the pledges for more investment for general practice and for more GPs and practice staff, made in NHS England’s GP Forward View and the NHS long-term plan are delivered urgently and in full.’

More than 2.5 million patients across England could see their GP surgeries close in the next five years, experts revealed in November.

The Royal College of General Practitioners said 762 practices in the UK are at risk of closing within the next five years because at least three quarters of their doctors are aged 55 or over and approaching retirement.

Experts said so many closures would have a ‘catastrophic’ effect on the health service.

Appointment waiting times could get even longer, workloads would grow and more people could end up queueing at A&E for minor illnesses.

Campaigners warned the potential closures would be ‘dangerous’ for patients and are calling for ‘drastic action’ to encourage new GPs to join the profession.

The situation is worst in Southend in Essex, where 13 of the area’s 35 GP practices are at risk of closing, potentially affecting nearly 39,000 patients.

A third of surgeries in the London borough of Havering could shut down, and more than 85,000 patients could lose their GP in Sandwell and West Birmingham.

Only around a quarter of areas of England have no practices at risk of closure, according to the RCGP’s estimates.

Remove entirely possible without diet Direct intervention in the metabolism

Dance show alum gets her groove back after stroke