A man who lost nearly half of his bodyweight during a crippling bout of Crohn’s disease transformed himself into a bodybuilder in just eight months.

He had a foot-long (30cm) section of his bowel removed and needed an ileostomy bag for months, but has since returned to health and broken a regional weightlifting record.

He credits a transformed diet and exercise regime, as well as surgery to repair his intestines, for his recovery from being ‘like a skeleton’.

Manny Singh Tura, from Leeds, lost almost half his bodyweight after his bowel burst on Christmas Day 2016 (left, after having surgery to fit an ileostomy bag because of his Crohn’s disease) but he has since gained more than three stone and become a weightlifter (right)

Mr Tura, from Leeds, weighed as little as four-and-a-half stone (29kg) when his Crohn’s was at its worst.

Kept in hospital because he was struggling to gain weight, he was tube-fed 1,200 calories a day but still struggled to recover.

‘Before getting ill I was 50kg and dropped down to around 29kg,’ he said. ‘I went from having a fairly muscular frame to being like a skeleton.

‘It was sad looking at my body because I had never been this thin. I’ve always been small but this was completely different.’

Thanks to a friend who snuck meals into the hospital for him, he managed to recover from being ‘like a skeleton’ and claims he gained a kilogram per day before being discharged.

In May 2017, when changing the ileostomy bag he hated, he noticed part of his bowel sticking out of his body through the hole in his abdomen.

He had surgery to repair his small intestine and get rid of the bag, and began his journey to becoming a champion bodybuilder. 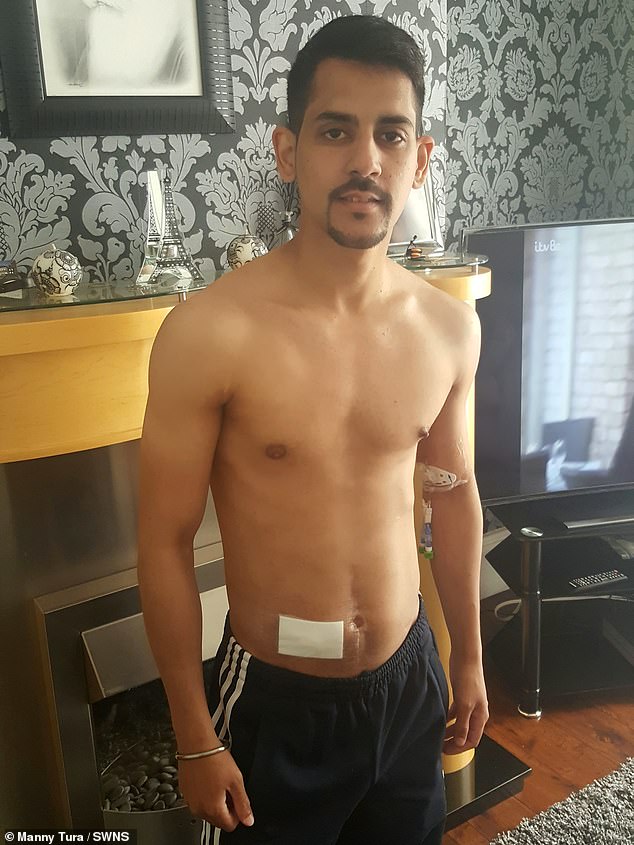 Mr Tura said transforming his diet from unhealthy kebabs and fizzy drinks to eating more fish, and exercising regularly, helped him gain weight and get back to a healthy size (pictured after having his ileostomy bag removed in May 2017)

In January 2018, eight months after the life-changing operation, he broke the Yorkshire and Northeast deadlift record for his weight class.

‘I admired bodybuilders so I made a promise to myself I would gain weight and be strong again,’ Mr Tura said. ‘I did it in less than a year.

‘Winning and breaking a record made me feel like I had independence over my body again.’

WHAT IS INFLAMMATORY BOWEL DISEASE?

Inflammatory bowel disease (IBD) is a medical term that describes a group of conditions in which the intestines become inflamed (red and swollen).

Ulcerative colitis affects the large intestine (colon) whereas Crohn’s disease can occur in any part of the intestines.

People of any age can get IBD, but it’s usually diagnosed between the ages of 15 and 40.

The conditions and chronic and cannot be cured so treatment usually relies on medication and lifestyle changes to manage the symptoms, but may include surgery.

He even came in fourth place at the British Men’s Powerlifting Championships in September.

Mr Tura credits the diet change for his incredible transformation.

‘I went from having three meals a day to five,’ he said. ‘My new strict diet helped me gain weight – I gained like 1kg a day.

‘One friend would make me mackerel, sardines and prawns every single night and each morning he would visit me in the hospital to drop off the food.

‘I had a hotplate for me to warm food a friend snuck in, I’d use it when doctors and nurses weren’t around, and had a can of air freshener to hide the smell of fish.

‘When I got home, I still had to tube-feed but I was more aware of what I was putting in my body.’

He still suffers from Crohn’s disease but says his new lifestyle helps him keep it under control – he goes to the gym at least five times a week and always eats healthily.

Crohn’s, which affects at least 115,000 people in the UK and 780,000 Americans, causes ulcers and swelling in the intestines.

It can make people lose weight because the intestines’ lining is damaged meaning it is less efficient at soaking up nutrients from food, and it can cause a reduced appetite and diarrhoea.

Mr Tura added: ‘Crohn’s doesn’t affect me – it’s a part of who I am but I have it under control on a day-to-day basis.

‘Doctors were amazing and took good care of me but there were never any recommendations of what type of diet I should have.

‘I felt helpless but I had to do my own research to find ways to help myself.

‘I used to eat doner kebabs and other junk foods regularly but once I stopped the stomach pain just went away. I felt so much better.’

Manny is not able to play sports like football in case a ball strikes him in the stomach and he ends up back in hospital.