Children battling chest infections should NOT be given amoxicillin because the antibiotic isn’t likely to help, study claims

Children suffering from chest infections are ‘not likely’ to benefit from a commonly-used antibiotic, a study claimed today.

Doctors should only prescribe the drug, branded as Amoxil, if they suspect the child has pneumonia, academics ruled.

The prescription-only drug was tested among 432 children with chest infections. The youngsters were all aged between six months and 12 years.

Children who got the drug saw their symptoms cleared in five days, on average. For comparison, youngsters given a placebo were ill for six days. 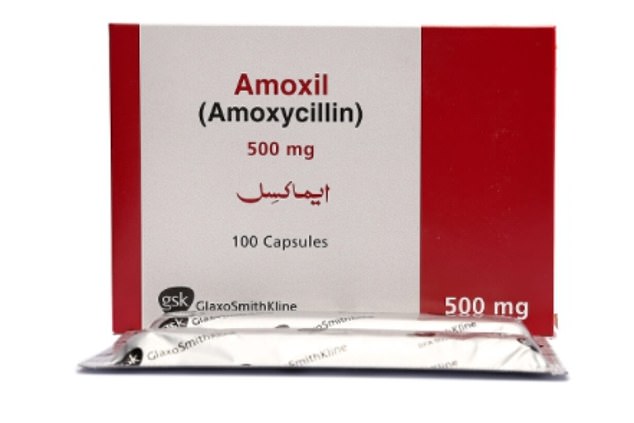 Researchers found amoxicillin should not be prescribed to children with chest infections, but still offered to those suffering from pneumonia (image of the drug)

Amoxicillin is an antibiotic commonly used in children to treat chest and ear infections.

But it is also used in adults to treat a range of bacterial infections including chest infections, dental abscesses and urinary tract infections.

In Britain it is available on prescription only. It is branded as Amoxil.

It is available as a pill at about 12 pence each, or as a liquid that can be drunk or given as an injection.

Usual doses are between 250 and 500mg, and the drug should be taken three times a day.

The most common side effects are nausea and diarrhoea.

The study — published in The Lancet — examined the effect of the drug among children who attended GP surgeries with chest infections in England and Wales between 2016 and 2020.

Experts tracked the children to measure the duration of their illness, and found it was similar among both groups.

The researchers judged that amoxicillin does not provide a ‘clinically important benefit’ for children with uncomplicated chest infections.

They said: ‘Amoxicillin for uncomplicated chest infections in children is unlikely to be clinically effective either overall or for key subgroups in whom antibiotics are commonly prescribed.

‘Unless pneumonia is suspected, clinicians should provide safety-netting advice but not prescribe antibiotics for most children presenting with chest infections.’

Professor Paul Little, the study’s main author, said: ‘Children given amoxicillin for chest infections where the doctor does not think the child has pneumonia do not recover much more quickly.

‘Indeed, using amoxicillin to treat chest infections in children not suspected of having pneumonia is not likely to help and could be harmful.’

Co-author Professor Alastair Hay, from the University of Bristol, said: ‘Our results suggest that unless pneumonia is suspected, clinicians should provide “safety-netting” advice — such as explaining what illness course to expect and when it would be necessary to re-attend — but not prescribe antibiotics for most children presenting with chest infections.’

The overuse of antibiotics is fuelling a superbug crisis because it causes bacteria to mutate and become resistant to the drugs.

GPs have been repeatedly ordered to reduce the number of prescriptions they give out as many antibiotics are useless against increasingly resistant germs.

Antibiotics are only effective when used to treat bacterial infections – as opposed to viruses including the one that causes Covid.

Treating vision loss globally would have social and economic benefits