Care worker, 31, who is forced to wear braces six years after botched dental work left her with wonky teeth receives a £17,500 payout

A woman who was left with wonky teeth after botched dental work has received a £17,500 payout.

Kimberley Briggs, 31, who wanted to have her teeth straightened in 2012, now has to wear braces for another six years to fix her teeth.

The care worker, of Leicester, was shocked to see her teeth becoming worse over the course of her five-year treatment.

She said she returned to her dentist, Dr Chhaya Patel, at Hallcross Dental Practice in Wigston, numerous times about her agonising pain.

Analysis of her dental records revealed Dr Patel should have removed her baby tooth – and the case was settled out of court. Dr Patel did not admit liability. 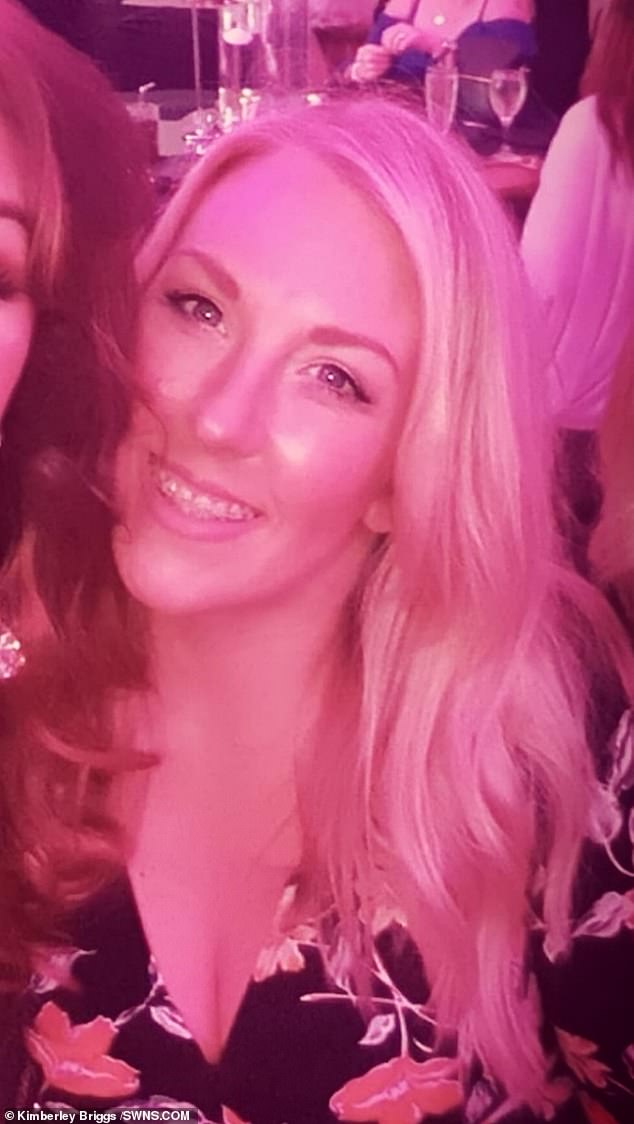 Kimberley Briggs, 31, who began botched teeth straightening treatment in 2012, has received a £17,500 payout for negligent dental care. She was in agonising pain for five years 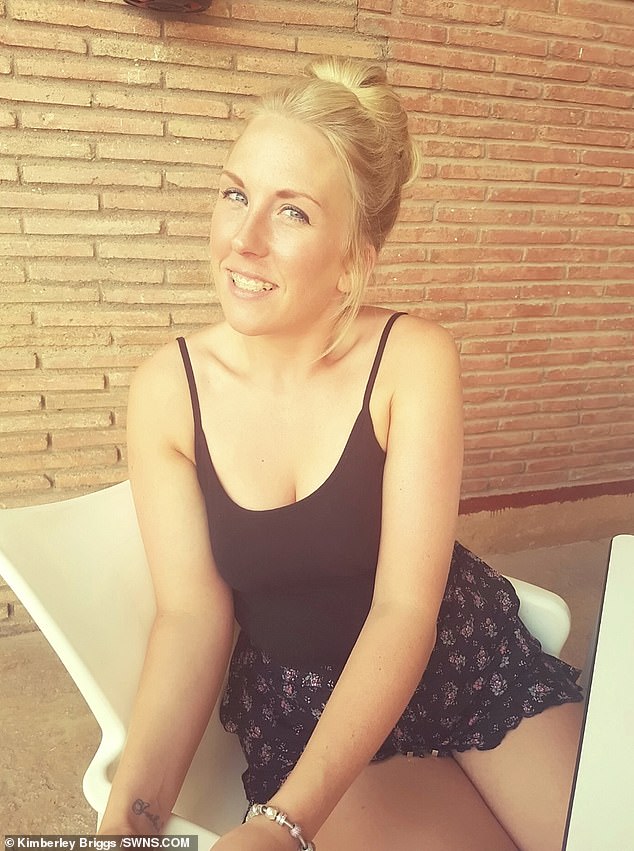 The special needs care social worker, from Leicester, says she watched her teeth moving to the side during her treatment, leaving her with a centre front tooth. Now, she must have another six years of work to fix her teeth, a severe knock to her already low confidence

Ms Briggs said: ‘I’ve suffered from depression, low self-esteem and loss of confidence because of this ordeal and the way my teeth look.’

Ms Briggs first approached Dr Patel to correct her teeth six years ago. She said: ‘I visited Dr Patel because I wanted my teeth straightened.

‘I’d never had any trouble with my teeth health-wise, but I thought they could look straighter.

‘Dr Patel said she had special expertise in orthodontics so I trusted her to give me the smile I wanted.’

It is unclear if, and how much, Ms Briggs paid. However, fees for private orthodontic treatment are usually around £2,500 but can be much higher, according to the NHS.

She was first told to wear aligners, which are mouthpieces which slip over the teeth and encourage them to move.

They can be taken out for eating, drinking or cleaning, but should be invisible and comfortable when wearing.

But the aligner caused her tremendous pain, which Ms Briggs instinctively knew should not have happened.

She said: ‘The aligners were agony. The pain seemed to be coming from a baby tooth that had never fallen out.

‘Before the aligners were fitted I’d even asked Dr Patel if the tooth should be extracted because I thought it might cause problems.

‘But she told me there was nothing to worry about, and when I complained about the pain she just said it would subside.

‘She was my dentist, so I naturally trusted her advice.’ 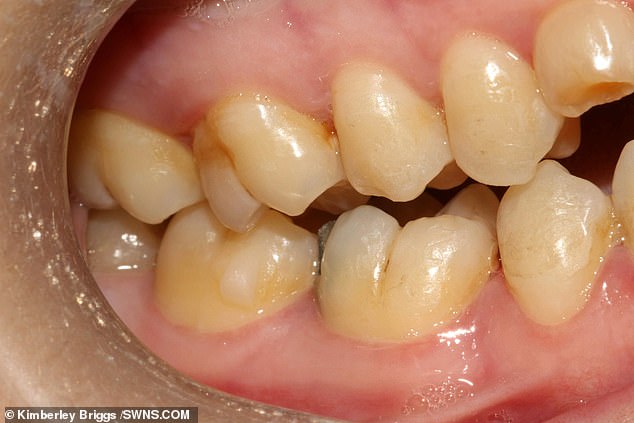 Ms Briggs’ teeth three years into the treatment. Ms Briggs’ questioned if a baby tooth should be taken out first, to which her dentist, Dr Chhaya Patel, said no 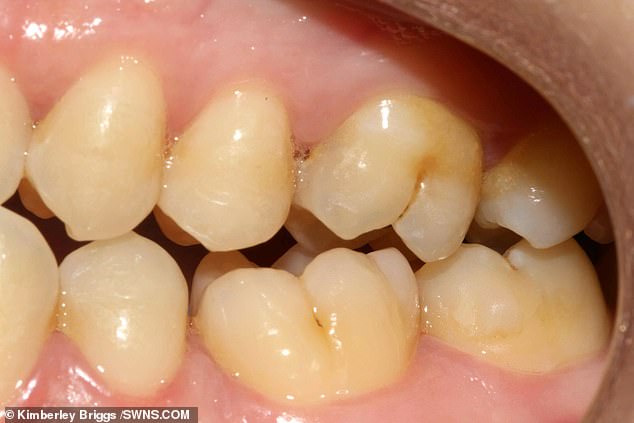 A new dentist told Ms Briggs that her baby tooth was the cause of her problems, leading her to take her case to solicitors

HOW CAN YOU GET TEETH STRAIGHTENING TREATMENT?

Orthodontic treatment is available on the NHS for young people under the age of 18 at no cost.

NHS orthodontic treatment isn’t usually available for adults, but may be approved on a case-by-case basis if needed for health reasons.

The ideal age to have braces is usually around 12 or 13, while a child’s mouth and jaws are still growing.

The opportunity for improvement in an adult is more limited and treatment is likely to take longer.

Private treatment is widely available. Fees for private orthodontic treatment are usually around £2,500, but can be much higher.

For aligners, which are invisible and removable braces moulded onto the teeth, costs can be between £1,700 to £4,500 depending on the level of treatment required.

Over the next three years, Ms Briggs said her teeth moved so far to one side that they looked off centre.

‘It looked like I only had one front tooth. Rather than seeing an improvement, I was becoming increasingly unhappy with how my teeth looked,’ she said.

Her agony became so bad that she struggled to wear the aligners at all.

She claimed she went back to Dr Patel on numerous occasions, telling her she was struggling to wear the aligners anymore and was not seeing any results.

But the dentist never offered any treatment to resolve her problems.

In 2015, the dentist fitted a retainer at her lower teeth and a fixed brace at her upper teeth.

Ms Briggs said: ‘In hindsight it seems ridiculous but I just trusted Dr Patel knew what she was doing.

‘I thought it must have been individual circumstances relating to my teeth, and didn’t think it could be down to Dr Patel’s treatment.

‘But after five years I was still suffering from pain and it looked like my front tooth was in the middle of my head.

‘I was having sleepless nights and my teeth looked crooked.’

Ms Briggs eventually changed dentists, where the extent of her mistreatment was uncovered.

Ms Briggs’ new dentist was shocked: ‘He immediately told me that my baby tooth should have been extracted.

‘He said this would have made the treatment simpler, more effective and would have stopped me suffering from pain.

‘He also confirmed my teeth were far from being straight and advised that I’d need extensive corrective treatment.’

The tooth’s root was also being forced to take too much pressure from the aligners which was causing Ms Briggs’ constant pain.

Ms Briggs approached The Dental Law Partnership, solicitors that represent patients who have received negligent treatment from their dentist, and the case was settled out of court.

Ms Briggs said: ‘To think all of this was avoidable is soul destroying. I have had to wear braces for years longer because of Dr Patel.

‘Your twenties are meant to be the best years of your life, but I had most of mine ruined by Dr Patel’s treatment.’

Dr Patel said she was ‘pleased’ that the case had been bought to a ‘satisfactory conclusion’.

Heather Owen, of the Dental Law Partnership, said: ‘The distress and pain our client experienced was completely unnecessary.

‘If the dentist had carried out adequate treatment in the first place, her problems could have been avoided.’

Flu symptoms: Common signs and symptoms of the flu – How to treat it yourself

Stomach bloating: Doing this activity in ‘moderation’ can still cause you grief