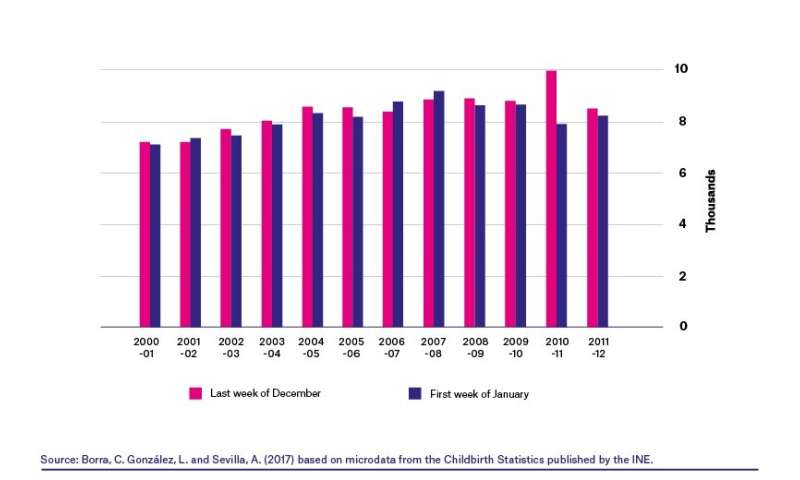 A study by Libertad González, professor with the Department of Economics and Business at UPF, Cristina Borra (University of Seville) and Almudena Sevilla (University College, London), reports that children born prematurely due to the scrapping of the “baby cheque” weighed less at birth (between 130 and 300 grams) and had 20 percent more hospitalizations, especially due to respiratory problems, although the negative effects seem to dissipate after the second month of life.

The research, which investigates the increased number of early deliveries for non-medical reasons in Spain, shows that some 2,000 families scheduled an early birth to receive a subsidy of 2,500 euros (known as the “baby cheque”). This has enabled investigating the impact of this practice on the health of babies. The induced delivery rate in Spain was 19.4 percent in 2010, almost double the WHO recommendation.

The study was published in Journal of the European Economic Association on 1 February. Within this project, the UPF researcher continues to monitor these children, now aged nine, to detect possible longer-term effects on health and cognitive development. According to the research, at the turn of the year 2010 to 2011, coinciding with the scrapping of the “baby cheque,” which was a Spanish government subsidy of 2,500 euros per child born intended to increase the birth rate, there were many more deliveries in late December than in early January.

The authors estimate that some 2,000 deliveries were induced for non-medical reasons, accounting for approximately 6 percent of all births in January. “Families who brought childbirth forward most were those with a university education, women of Spanish nationality and in provinces with a greater presence of the private hospitals network,” they write. 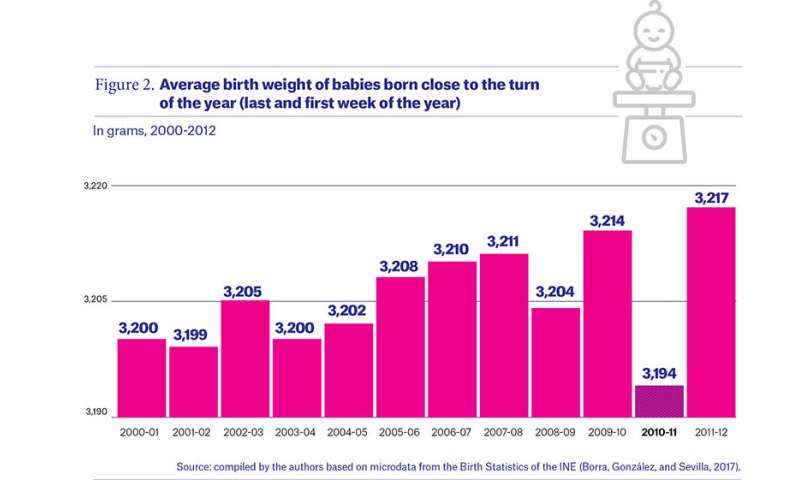 The change in regulations introduced by the Spanish government unexpectedly created an incentive to bring deliveries that were expected for around the end of the new year forward to December. “These conditions created an interesting natural experiment to evaluate the effects of lower gestational age (preterm delivery) on the health of newborns,” the researchers suggest.

The study is based on high-quality administrative data on births and hospital admissions of all babies born in Spain between 2000 and 2013. Specifically, the authors analysed two data sources provided by the National Statistics Institute (INE): Birth statistics, which are completed in hospitals for every birth, and the survey of hospital morbidity, with information on 99 percent of hospitalizations of at least one night.

To estimate the number of advanced deliveries, the number of births that occurred around the turn of the year (late December 2010 and early January 2011) were compared using the previous and subsequent years as a reference. Under normal conditions, about 50 percent of the babies born around the turn of the year do so in December, and the remaining 50 percent in January. However, at the turn of 2010 to 2011, 56 percent were born in December (9,946 new-borns) and 44 percent in January (7,845). “During the last week of 2010, there was a rise in the number of births and a fall in early January 2011, which is when the baby cheque disappeared, and this is clearly an unusual case,” state the authors.

Babies born preterm due to the scrapping of the “baby cheque” weighed less at birth (between 130 and 300 grams less than the average, i.e., weighing up to 9 percent less) and suffered a considerable increase in hospitalization rates during their first two months of life (approximately 20 percent more), mainly due to respiratory conditions. However, no long-term effects were observed on the health of these children.

However, the proportion of babies with low or extremely low weight (less than 2,500 grams or less than 1,500 grams, respectively) did not increase, suggesting that scheduled advances occurred primarily in very advanced pregnancies. “It doesn’t appear that such foolhardy acts were committed as causing delivery several weeks before the due date, but rather that the early deliveries were fundamentally related to births with an estimated due date close to the turn of the year,” say the authors of the study.

Political implications and the importance of available information

“Since individuals and families respond to economic incentives, it would have been advisable not to have scrapped the ‘baby cheque’ so suddenly, but to have progressively reduced the amount of the subsidy over the months,” the researchers advise.

Neuroscientists explore brain ‘events,’ toward a new understanding of brain injuries and disorders

Can inhaling helium gas harm you? Find out