A drug commonly given out by the NHS to breast-cancer patients may affect their brain function and memory, research suggests.

Although Cancer Research UK states up to 30 per cent of patients experience side effects like hot flushes and fatigue, new research suggests the medication’s complications may be far more serious.

When given to monkeys, the drug reduced the function of their brain cells in a region known as the hippocampus, and worsened their performance on memory tests, after just four weeks. 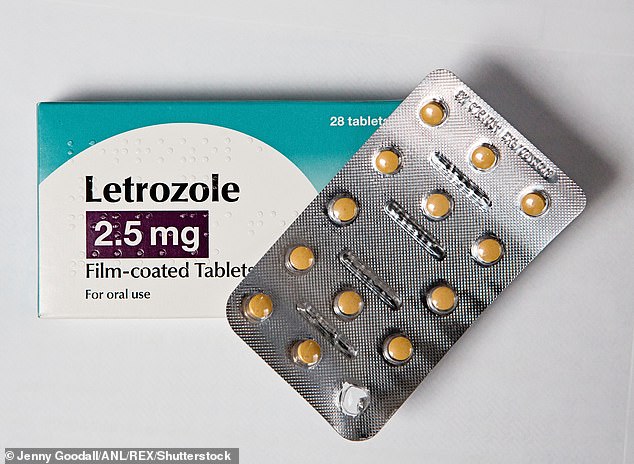 Letrozole is primarily used to treat breast cancer and was prescribed 755,866 times last year in the UK, NHS Digital statistics show. It is already associated with hot flashes and fatigue

The study was carried out by the University of Toronto and led by research associate Dr Nicole Gervais.

Some breast cancers are stimulated by the hormone oestrogen, which may get converted from testosterone via the enzyme aromatase. Letrozole – which is given as a tablet – is an aromatase inhibitor (AI).

Letrozole only works in women with this form of breast cancer who have been through the menopause. This is due to them no longer producing oestrogen via their ovaries, with the hormone therefore only coming about via aromatase.

The drug is linked to joint pain and raised cholesterol levels in one in ten people, as well as loss of appetite, hair thinning and vaginal dryness in one per cent of cases. It is often given after surgery or chemo to prevent cancer returning or spreading.

Letrozole may bring about depression, forgetfulness and insomnia due to aromatase being expressed in the hippocampus, which is the brain region that controls emotion, memory and thought processing.

‘Four weeks of an oral AI has adverse effects on multiple behavioral, neuronal and physiological outcomes in marmosets,’ the authors wrote in The Journal of Neuroscience.

In the first study of its kind, three male and five female marmoset monkeys were fed letrozole – also known by its brand name Femara – hidden in pudding. The amount given was calculated ‘based on the recommended dose for women’.

These monkeys were compared against six males and two females who were just fed the pudding.

Marmosets were chosen due to the ‘organisation of the brain being comparable to a human’s’, the authors wrote. The monkeys also ‘share many similarities with humans in sleep, cognitive ability and anxiety profiles’.

Urine samples from the animals were analysed to determine levels of the stress hormone cortisol. Signs of anxiety were also monitored in the animals’ behaviour, such as their ‘hair standing on end’ or any agitated movements.

When the experiment ended, the monkeys were put down so changes to their brain structure could be analysed.

Results suggest the animals given letrozole had reduced brain cell activity in the hippocampus and performed worse on memory tests.

The letrozole group demonstrated a drop in performance of five to seven per cent, however it is difficult for the authors to interpret how meaningful this change would be.

While the link between these symptoms, including effects to the brain, and the use of aromatase inhibitors has been made before, it’s the first time a clear direct link has been made.

Dr Gervais told MailOnline: ‘Women have also been treated with chemotherapy, radiation thereapy and other anti-estrogen medications with known effects on the brain, and so it has been a challenge to tease apart the unique contributions of aromatase inhibitors to the reported side effects.’

Although the findings can’t be applied to women in general, Dr Gervais said: ‘They can inform women considering taking this medication about what some of the effects might be.

‘These findings might also help normalize some of the experiences women currently taking the medication are having.’

Although concerning, the researchers stress further studies are required and letrozole has been shown to boost survival among breast-cancer patients.

Five-year disease-free survival was higher in a group treated with letrozole – at 95 per cent – compared with 91 per cent among a placebo group, researchers at the Avon International Breast Cancer Research Program at Massachusetts General Hospital Cancer Center found.

Breast cancer is the most common cancer in women worldwide, with nearly 1.7million new cases diagnosed in 2012, according to the World Cancer Research Fund.

It even affects one in eight women at some point in their lives in both the US and UK.

WHAT IS BREAST CANCER, HOW MANY PEOPLE DOES IT STRIKE AND WHAT ARE THE SYMPTOMS?

What is breast cancer?

Breast cancer develops from a cancerous cell which develops in the lining of a duct or lobule in one of the breasts.

When the breast cancer has spread into surrounding breast tissue it is called an ‘invasive’ breast cancer. Some people are diagnosed with ‘carcinoma in situ’, where no cancer cells have grown beyond the duct or lobule.

Most cases develop in women over the age of 50 but younger women are sometimes affected. Breast cancer can develop in men though this is rare.

The cancerous cells are graded from stage one, which means a slow growth, up to stage four, which is the most aggressive.

A cancerous tumour starts from one abnormal cell. The exact reason why a cell becomes cancerous is unclear. It is thought that something damages or alters certain genes in the cell. This makes the cell abnormal and multiply ‘out of control’.

Although breast cancer can develop for no apparent reason, there are some risk factors that can increase the chance of developing breast cancer, such as genetics.

What are the symptoms of breast cancer?

The usual first symptom is a painless lump in the breast, although most breast lumps are not cancerous and are fluid filled cysts, which are benign.

The first place that breast cancer usually spreads to is the lymph nodes in the armpit. If this occurs you will develop a swelling or lump in an armpit.

How is breast cancer diagnosed?

If you are confirmed to have breast cancer, further tests may be needed to assess if it has spread. For example, blood tests, an ultrasound scan of the liver or a chest x-ray.

How is breast cancer treated?

Treatment options which may be considered include surgery, chemotherapy, radiotherapy and hormone treatment. Often a combination of two or more of these treatments are used.

How successful is treatment?

The outlook is best in those who are diagnosed when the cancer is still small, and has not spread. Surgical removal of a tumour in an early stage may then give a good chance of cure.

The routine mammography offered to women between the ages of 50 and 70 mean more breast cancers are being diagnosed and treated at an early stage.

How long do Covid symptoms take to show?