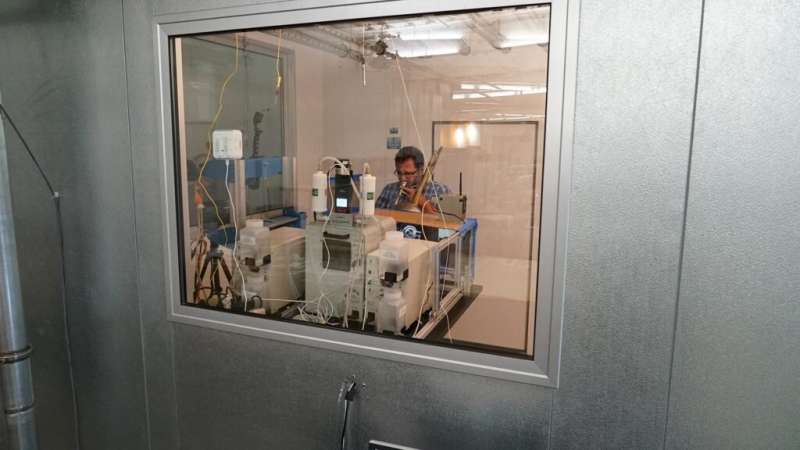 Just like coughing, sneezing, talking and singing, playing wind instruments—particularly those in the brass section—can spread respiratory particles that may carry the COVID-19 virus, according to a Colorado State University study.

Early in the pandemic, CSU engineers led by Professor John Volckens teamed up with musicians and performers to try and quantify respiratory particle emissions from various activities like singing and music-playing. They were seeking to provide insight into just how much performance arts could spread COVID-19 and to inform safety measures moving forward.

They’ve just published the results of their measurements of particle emissions from wind instrument-playing, including brass and woodwinds, in the journal Scientific Reports. A previous analysis looked at emissions from singing and was published in 2021. The papers are co-authored by Dan Goble, director of the CSU School of Music, Theater and Dance.

The researchers used a cutting-edge aerosol measurement chamber and recruited volunteers to perform in the chamber while aerosol emissions from themselves—or their instruments—were analyzed. For the instruments study, they had 81 volunteer performers of both sexes and varied age—between 12 and 63. The volunteers played wind instruments including the bassoon, clarinet, French horn, oboe, piccolo, saxophone, trombone, trumpet and tuba.

According to the research, brass instruments, on average, produced 191% more aerosols than woodwinds. The researchers’ highest particle counts of brass-playing was even higher than their highest results from singers in their previous study, by nearly a factor of four. Being male was also associated with a 70% increase in emissions from instrument-playing, probably due to lung size and capacity, the researchers think. Louder playing of brass instruments was associated with higher particle counts, but louder playing of woodwinds didn’t increase emissions.

The researchers also took measurements with performers using bell covers in an attempt to mitigate the particle spread, which seemed to work. The use of bell covers reduced emissions from trombone, tuba and trumpet players, with average reductions of 53–73%, but not for oboe or clarinet.

Volckens, a mechanical engineer and aerosols expert who also leads CSU’s mask-testing facility, likened bell covers to blue surgical masks for instruments—good, but not great in terms of limiting spread.

“The data suggest that masks and bell covers cut down half to 75% of particles coming out of the mouth or instrument,” Volckens said. “And the reason blue surgical masks or bell covers don’t work better is that they’re just not a tight fit. These devices don’t achieve an N95 level of protection.”

He also said that “if we could make N95s for instruments,” it would likely help reduce emissions from brass instruments, but not from woodwinds, because those instruments have too many escape holes before the bell. A single-exit instrument like a trumpet is easier to control with protective measures.

This study, and previous ones like it, confirm what the researchers suspected: At the start of the pandemic, particularly before the advent of vaccines, shutting down performing arts in the name of safety likely saved lives.