Boy, 14, stopped his brother from bleeding to death after he impaled himself on bicycle handlebars by using first aid he learnt just weeks before 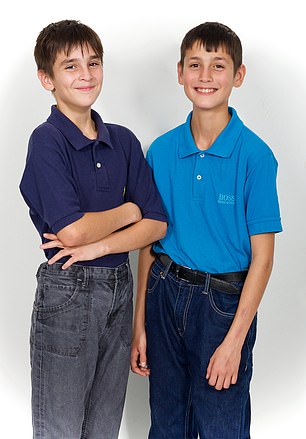 Jack Smith, then 14, (right) saved his brother, Connor Osborne, then 13 (left), from bleeding to death by using first aid he learned at the Army Cadets

The injuries Connor Osborne suffered after coming off his BMX bike were, according to his mother: ‘Like something from a horror movie.’

Connor, then 13, and his brother, Jack Smith, then 14, had been enjoying the first day of their school summer holidays speeding down a hill on their bikes when Connor hit a stone and went flying into the air. As Connor landed, the impact pushed the left handlebar into his side.

Connor tried to get to his feet, but his legs buckled. ‘I saw blood was pouring from just below my stomach on my left side,’ he says. ‘It was all over the front of my T-shirt and I called out to Jack that I was bleeding before collapsing on to the ground.’

The force of the impact had severed his femoral vein — one of the body’s main veins located in the upper thigh and pelvic region. There was a risk he could bleed to death.

But, rather than panicking, Jack calmly took action. Just weeks earlier, both boys had joined the Army Cadets, where they had been trained in emergency first aid.

Were it not for that, the outcome could have been very different. Their story vividly highlights what a difference even basic first aid skills can make. 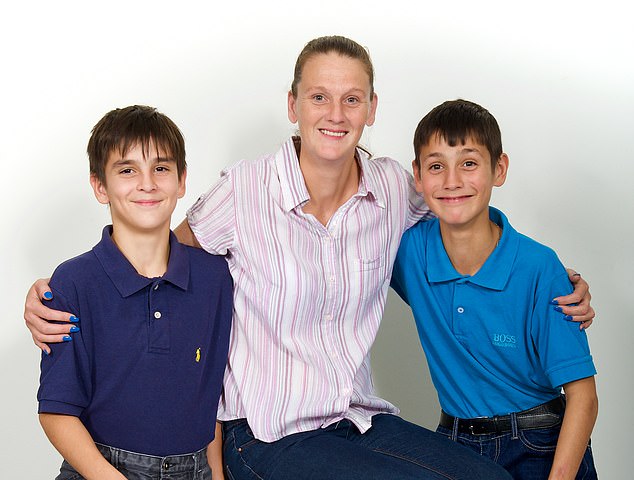 Jack (right) ripped off his T-shirt and pressed it against the wound to apply pressure and stem the bleeding coming from Connor (left) and used his other hand to call for an ambulance and his mother, Emma, 36 (centre)

‘When Connor fell on to the floor after standing up, I thought he was messing about,’ recalls Jack, now 15.

‘But then I saw that he was covered in blood and I ran to help. I felt scared as I had never seen so much blood and Connor was frightened, but I knew it was important to stay calm and recall my training.’

Jack ripped off his T-shirt and pressed it against the wound to apply pressure and stem the bleeding.

With his other hand he dialled 999 on his mobile phone and asked for an ambulance.

‘I told them that my brother had impaled himself on his bike handlebars,’ he says.

‘Connor kept saying: “I want to go to sleep”, but I’d been taught how important it was to keep a patient conscious so they could tell you if they started to feel worse, so I kept him talking.’

Jack also called his mother, Emma, 36, who arrived at the scene, two miles from their home near Leeds, just before the paramedics. 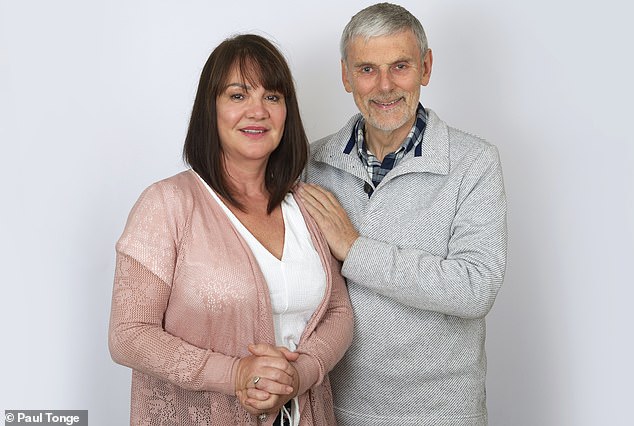 Retired physiotherapist and grandfather of five, Malcolm Robinson, 71, owes his life to the prompt action of off-duty nurse Judy Lewis (pictured together), who administered first aid after he collapsed suffering a cardiac arrest in April 2017

‘The wound was jagged and like something from a horror movie,’ recalls the full-time mother of four who is married to Lee, 40, a warehouse operative.

‘Blood was pouring and you could see tissue hanging out. I was so shocked I couldn’t even speak, but Jack was so in control I instinctively trusted him to carry on doing the right thing.’

Shockingly, despite being in a crowded park that day, only one other person, a girl, came forward to help. ‘That really surprised me,’ says Emma. ‘But I honestly don’t know if I’d have been able to respond myself. It’s a scary situation to be in — but for a kid it’s even more terrifying.’

Connor was taken to Leeds General Infirmary for surgery.

‘The doctors said Jack had saved his brother’s life. It makes me go cold thinking about how differently it could have ended,’ says Emma.

Connor was very lucky. Scans showed the handlebar had just missed his liver and kidney. And had Jack not stemmed the blood, Connor could have lost consciousness and had a cardiac arrest, says Dr Lynn Thomas, medical director of St John Ambulance.

And I owe my life to a guardian angel passing away

Retired physiotherapist and grandfather of five, Malcolm Robinson, 71, lives in Sutton Coldfield with his wife, Ann, 59.

He owes his life to the prompt action of off-duty nurse Judy Lewis, who administered first aid after he collapsed suffering a cardiac arrest in April 2017.

‘I remember little of that day, except catching a bus into Birmingham to meet my wife and texting her to say I didn’t feel well,’ says Malcolm. ‘We went on a walk, only for me to keel over on the way to the restaurant.

‘A passer-by dialled 999, but mistook my gasps — a reflex that occurs when the heart stops beating — as a sign I was still breathing. As a result, the call wasn’t treated as an emergency. Thankfully, Judy happened to be driving past and stopped to help. She began CPR and, vitally, alerted the call handler that I was a non-breathing casualty.

‘Over the next 26 minutes, she twice got me breathing and laid me in the recovery position, only to “lose” me again and have to restart CPR. Another bystander, who we have never managed to trace, helped Judy, and between them they kept me going until paramedics arrived and re-started my heart with a defibrillator.

‘I needed emergency surgery to insert three stents to open the blocked blood vessel that had triggered my heart attack and subsequent cardiac arrest. Judy phoned the hospital to see if I was OK and spoke to Ann, who cried as she said she had been trying to find her to say thank you.

‘It was sobering to realise that, without Judy’s intervention, the outcome would have been very different.

‘A few months later, Judy came to a family lunch, which was emotional for us all.

‘I decided I needed to say thank you by giving something back. Together with the lead resuscitation officer from my local health trust, I formed CPR Counts — providing free, local life-saving courses. Knowing there are now 700 more potential lifesavers thanks to our courses is a great feeling.’

Connor was in hospital for five days, and for the rest of the school holidays he used a wheelchair as he could not walk very far.

While Connor is now considering a career in medicine as a result of his brother’s actions, last week Jack was presented with a St John Ambulance Young Hero Award for his quick response.

Dr Thomas says: ‘Situations like this happen every day in Britain, and so many times the outcome is not positive because, unlike this young man, people are scared to come forward and do something.’

Research conducted in 2017 by the British Red Cross found that just 5 per cent of adults had the skills and confidence to provide emergency first aid. A 2015 survey for the British Heart Foundation revealed that 60 per cent of people worried they wouldn’t know what to do if they witnessed someone having a cardiac arrest — and only 20 per cent were able to recognise the signs of one.

The good news is that, following years of campaigning from organisations such as St John Ambulance, the British Red Cross and the British Heart Foundation, first aid lessons will be compulsory in all state schools from September 2020.

Children will start learning the basics from the age of five. ‘By the time they leave primary school, they will know how to treat a basic head injury and make a 999 call — telling the call handler what the problem is and where they are,’ says Dr Thomas.

‘By the time they leave secondary school, they will have been taught additional skills, including how to do CPR if someone has a cardiac arrest, and how to use a defibrillator, a device to shock a heart in cardiac arrest into beating normally.’

Education Secretary Gavin Williamson told Good Health the vision is to ‘help us create a new generation of lifesavers’.

Charities like St John Ambulance hope that the classroom policy kick-starts a national first aid awareness initiative — with children passing on knowledge to families and encouraging them to be first aid-trained as well.

Dr Thomas, who is also an acute medical unit doctor at Portsmouth Hospitals NHS Trust, says: ‘We need to keep teaching out in the community — reminding each other how to do this — until first aid and CPR become part of your muscle memory, and your instinct is not to run in the opposite direction but to go straight to that person to see what you can do to help.

‘It is nearly always better to do something than nothing,’ she adds. ‘The more you use your first aid, the more the fear factor disappears.’

She says some people hold back, worrying they will get into trouble if they do something wrong.

‘In fact, legally, that’s not the position. If you are helping someone, and doing everything you can, you are fine.

‘In France, you are legally obliged to help if you come across a road traffic accident. I don’t know if it’s made any difference to outcomes, but maybe this is the route we need to consider in this country.

‘But anything you can do — even being able to give a coherent message to the emergency call handler — is going to make a difference. Doing nothing will not help a person survive.’