Ball pits are so dirty it’s dangerous: Scientists find a single plastic ball could have thousands of germ cells linked to pneumonia, sepsis and meningitis

Researchers from the University of North Georgia examined six sites and found over 31 kinds of bacteria that can cause everything from bladder infections to infections of the heart lining.

Alarmingly, clinics that have ball pits might go days or even weeks without cleaning the play equipment.

The brightly colored pits are rife with germs, and the researchers warn that sanitizing practices need to be standardized to make sure that children aren’t exposed to harmful contaminants. 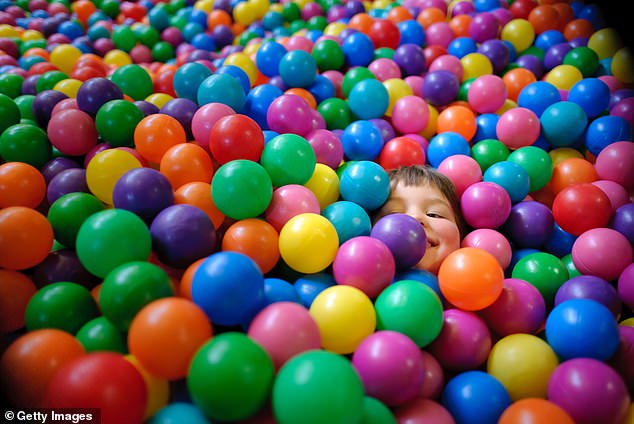 Even in clinical settings, scientists found that ball pits contain as many as hundreds of thousands of germ cells from 31 types of bacteria, according to a new study

For the new study, published in the American Journal of Infection Control, the researchers limited their investigation to ball pits at six physical therapy centers.

The tactile and visual of ball pits encourages children to develop their motor and sensory skills, so physical therapists often use them as a sort of therapeutic play.

But since the 1980s, they’ve exploded in play center and chains like McDonald’s.

So if ball pits in clinical settings are dirty, high traffic ones in public facilities are likely downright filthy.

One scientist famously found that McDonad’s Play Place Ball Pits were dirtier than its toilets.

There have been reports of finding everything from homeless people, to sharp objects and copulating teenagers in ball pits.

In the infrequent event that public plastic balls are cleaned, the methodology is hardly up to hospital standards.

In a Reddit post, an alleged former employee of a Chuck E. Cheese Family Fun Center said that once the balls reached visible grime-level filth, ‘we put them in my boss’ pickup truck in netted bags. Then we just went through a carwash.’

It’s not exactly a secret or a surprise. The pits might be a child’s plastic dream but they’re a parent’s nightmare, as they are ‘often contaminated with visible dirt, vomit feces or urine,’ the researchers wrote.

Any one of those nasty contaminants is crawling with bacteria.

In fact, the researchers found 31 different bacteria in the six ball pits the tested.

And the germs weren’t just present sporadically or in trace amounts.

To do their tests, the team fished out balls from different depths and areas of each pit.

At the clinic with the dirtiest ball pit, the researchers found an average of 170,818 bacteria per ball. One ball had 712,000 microorganism cells.

Collectively, these bugs can cause sepsis,urinary tract infections, endocarditis (an infection of the heart’s lining), meningitis, bloodstream infections, skin infections and pneumonia in children.

And oral Strep can cause an adult respiratory distress syndrome.

They also found a yeast that can cause fungal infections in people with compromised immune systems.

It’s inevitable that anywhere human bodies go, there will be human bacteria populations – and the ball pits were no exception.

Infections from environmental bacteria are less common but possible. The researchers found bacteria normally associated with plants, dirt, water and certain foods in the ball pits as well.

These pathogens have been known to cause eye infections in babies, sepsis, heart lining infections, blood and skin infections.

All of these germs are particularly dangerous to young children whose sometimes rambunctious activities leave them with scratched limbs and scabby knees, just waiting for opportunistic infections to sneak in.

Currently, the study authors note, national standards for how and how often ball pits should be cleaned ‘remain elusive.’

The researchers said that more and larger studies need to be done, but ‘if warranted,’ it might be necessary to develop ‘standardized cleaning protocols developed to limit the presence of opportunistic pathogens in this environment.’