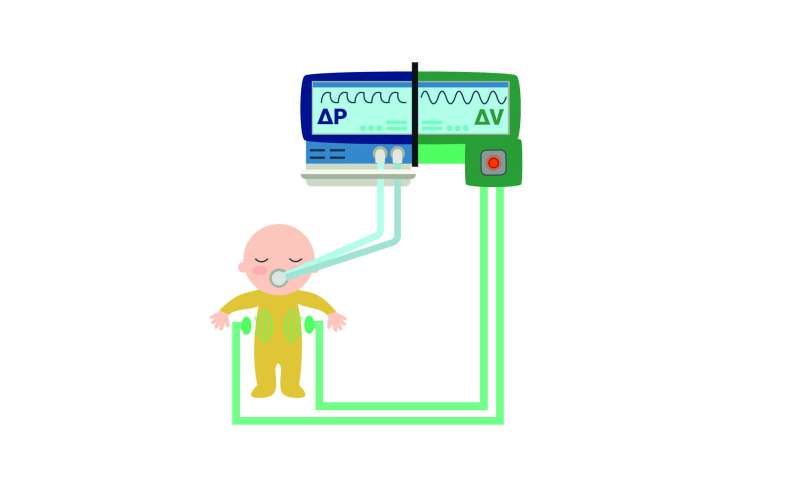 In intensive care wards, artificial respiration is often used as a last resort to save a patient’s life. Unfortunately, however, it brings with it the risk of acute or chronic lung damage, particularly if the ventilator is working against the patient’s respiratory impulse. Therefore, researchers from the Fraunhofer Project Group for Automation in Medicine and Biotechnology in Mannheim are working on an innovative new sensor aiming to provide a gentler way to administer artificial respiration, especially for children and newborn infants. A prototype of the sensor system will be on display at the MEDICA trade fair in Düsseldorf from November 18 to 21, 2019 (Hall 10, Booth G05).

Premature infants often require intensive care such as artificial respiration due to their underdeveloped lungs. This leads to multiple potential complications including volutrauma, which is inflicted by the ventilator pumping too much air into the tiny lung. Moreover, it can also lead to barotrauma, when the ventilator applies air at too high a pressure, especially during the infant’s exhalation. To avoid these sorts of complications, doctors exercise particular caution when dealing with such tiny, fragile patients. For instance, the tube is not sealed airtight within the trachea as would be the case for adults. This allows some of the air to escape, thus reducing the risk of trauma. However, it also prevents doctors from providing their young patients with optimal respiration.

To solve this problem, Jan Ringkamp and Jens Langejürgen of the Fraunhofer Institute for Manufacturing Engineering and Automation’s Project Group for Automation in Medicine and Biotechnology PAMB are working on a gentler approach called Thorax Monitoring. “Essentially, it’s a small measuring device that detects whether a patient undergoing artificial respiration wants to breathe in or out,” Ringkamp explains. “This would allow ventilators to continually adapt themselves to the patient’s breathing pattern. Zero volu- or barotrauma with optimal respiration—that’s the goal,” Langejürgen says.

The Thorax Monitoring system uses two antennae attached to or next to the patient’s chest with one antenna transmitting an electromagnetic wave and the other receiving it. The principle is that muscle, fat and tissue all have different electrical properties from air in the lungs. Despite sounding rather complex, the general idea is quite simple: When a patient inhales, the lungs expand as they are filling with air. The electromagnetic wave travels faster through air than tissue. When the patient exhales, it is the opposite way round: The lungs contract, the electromagnetic wave must travel through more tissue, and thus its progress is slowed.

In other words, there is a measurable difference between inhaling and exhaling that can be picked up by the Thorax Monitoring system. It works for premature infants and any other patients incapable of breathing on their own but whose bodies are still making the attempt. “Even if the expansion or contraction of the lung is extremely minimal, it still has a measurable effect on the signal. Lab testing has shown that we can detect changes well under one milliliter,” Ringkamp says. “The Thorax Monitoring system tracks the patient’s attempted breathing pattern and can direct the ventilator to provide support accordingly. One advantage of our approach is that we don’t have to attach sensors to the patient to do it—which is especially important given premature infants’ highly sensitive skin,” Langejürgen says.

Cancer: More people surviving cancer worldwide – but this is where the UK ranks

Pull Up a Chair for This At-Home Ab Workout