Scientists develop a ‘window to the brain’: 3D-printed ‘skull’ allows experts to peer inside a mouse’s head in real-time and could one day help disorders like Alzheimer’s and Parkinson’s

A transparent mouse skull which can be used as a window to the brain could provide new insights into human brain conditions like Alzheimer’s disease.

Researchers have developed the implant as an ‘unprecedented’ way to monitor and visualise brain activity.

Named the See-Shell, it’s a 3D-printed replica of the animal’s skull which can be used to surgically replace part of the mouse’s head.

Once in place, the See-Shell allows researchers to both record brain activity and take photos or video of the brain’s surface in real time. 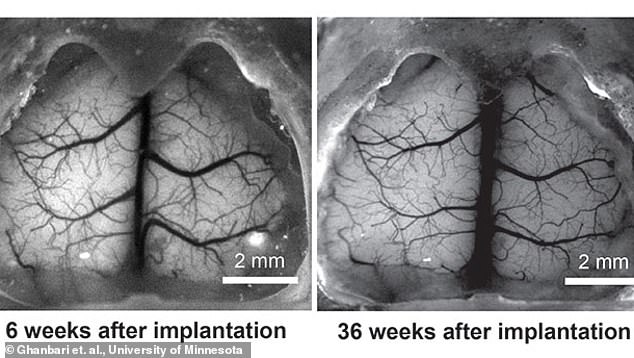 Scientists at the University of Minnesota developed the implant as a way of getting a better insight into the live brain’s workings.

And, because mouse brains are so similar to human brains, what the See-Shell shows could translate to human medical research.

It could shine a light on illnesses like Alzheimer’s disease, Parkinson’s and injuries such as concussions.

Timothy Ebner, a co-author of the study said: ‘These are studies we couldn’t do in humans, but they are extremely important in our understanding of how the brain works so we can improve treatments for people who experience brain injuries or diseases.’

The implant will allow researchers to watch what happens to the surface of part of the brain – the cortex – when they stimulate different areas of the organ.

In the past they have been limited to looking at small sections piece by piece,  unable to link events to what may be happening elsewhere in the head.

Images produced by the team already shows how filming the brain in this way could work.

Pictures show the brain appearing to glow and then darken at other times, with brighter images showing moments of more intense nerve activity.

Suhasa Kodandaramaiah, another author of the paper, said: ‘This new device allows us to look at the brain activity at the smallest level zooming in on specific neurons while getting a big picture view of a large part of the brain surface over time.

‘Developing the device and showing that it works is just the beginning of what we will be able to do to advance brain research.’

Another particular advantage of the See-Shell is that the mouse’s body accepted the implant.

The research was published in the journal Nature Communications.

Alzheimer’s disease is a progressive, degenerative disease of the brain, in which build-up of abnormal proteins causes nerve cells to die.

This disrupts the transmitters that carry messages, and causes the brain to shrink.

More than 5 million people suffer from the disease in the US, where it is the 6th leading cause of death.

As brain cells die, the functions they provide are lost.

That includes memory, orientation and the ability to think and reason.

The progress of the disease is slow and gradual.

On average, patients live five to seven years after diagnosis, but some may live for ten to 15 years.

Wearing Contacts Increases Your Chances of Getting Coronavirus

Real Women on The Relationship Wisdom They Swear By